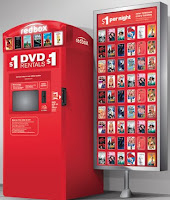 Ripple Effect of Lost Revenues in Southern California Could Cost More Than 9,280 Jobs and $1.5 Billion in Economic Output, Along With Reduced Contributions to Guild and Union Pension Plans
Los Angeles – The Los Angeles County Economic Development Corporation (LAEDC) today unveiled a new economic study entitled “The Economic Implications of Low Cost DVD Rentals” which illustrates the negative impact that low cost, new-release DVD rentals could have on the Entertainment industry and the Southern California economy.
The LAEDC study, which utilizes the Redbox model of $1 DVD rentals available at the street date, shows the ripple effect of $1 billion in lost revenues to the domestic home video industry in the Southern California region – the entertainment capital of the world – would lead to an additional $500 million in reduced economic activity. The loss of motion picture production in and around Los Angeles would result in the loss of more than 9,280 jobs with annual earnings of almost $395 million, according to the LAEDC’s study.
“The economics of the motion picture industry are based on exclusive release windows which allow price differentiation - that is - some earlier transactions take place at higher price points," said Gregory Freeman, Vice President of Consulting and Economic Policy for the LAEDC. "Redbox, or any other distributor that weakens the release window model, could reduce overall industry revenues. Lower revenues will likely lead to lower production activity, hurting the Southern California economy.”
Of the 9,280 jobs, more than half of the losses will occur in the Information Sector, the LAEDC found. In addition to motion picture and sound recording industries, this sector includes publishing industries, radio and television broadcasting, telecommunications industries and Internet service providers. Other industries impacted will be retail trade, accommodation and food services, health care and social assistance, professional, scientific and technical services, and manufacturing, among others.

LAEDC Study Concludes Redbox’s $1 DVD Rentals Could Result in $1 Billion in Entertainment Industry Losses p. 2/2
The loss of production will also result in a reduction of up to $35.4 million in contributions to health and welfare funds for entertainment guild and union members. The LAEDC study found that the majority of this loss will occur in union plans for below-the-line employees because residuals paid to such employees are diverted into health and welfare funds.
Finally, state, county and local tax revenues could be reduced by more than $30 million, according to the LAEDC study. Earnings that would have circulated throughout the regional economy, generating taxable purchases and thus tax revenue, will be lost. Additionally, the state will lose income tax revenue and unemployment and disability taxes that would have been paid.
On top of the losses caused by Redbox $1 DVD rentals, the home video industry as a whole is undergoing transformational change, which is described in some detail in the LAEDC study. The current recession has adversely affected consumer purchases of discretionary items, technology is enabling digital delivery of content, and households are opting for other forms of entertainments. Nonetheless, the LAEDC study concludes, any loss of revenue due to the widespread availability of low-cost rentals, particularly if new releases are available for rent on the street date, can be characterized as an opportunity foregone, since overall revenues of the industry would be higher if these rentals were not available.
Redbox’s low-cost kiosks are challenging the traditional distribution and release model of the industry, which is built upon timed, sequential release into differentiated market segments through a variety of channels (box office, sell-through, rental, pay television and cable). According to the report, the financial success of a project (and its distributor) depends on a multi-phased distribution strategy. Although box office numbers are headlined in industry and popular press, revenues from this income stream account for less than twenty-five percent of the total revenues earned by distributors. Most movies are not immediate money makers and companies rely on sequential sales, such as in the home entertainment market to recoup their production and marketing investment.
Given the unpredictability of the studio agreements and litigation with Redbox, the LAEDC report finds that the economic impact of the spread of low-cost new release DVD rentals is uncertain. However, the report says film production will decline relative to what it would otherwise have been.
The report also points out that new forms of digital delivery will provide new streams for the industry, but the decline in DVD revenues represents an ongoing loss of an existing significant revenue stream, while the offsetting gains in revenue from digital delivery seem to be more uncertain.
To view the entire report, visit www.laedc.org.

About LAEDC (www.LAEDC.org) The Los Angeles County Economic Development Corporation (LAEDC), the region’s premier business leadership organization, is a private, non-profit organization established in 1981. Its mission is to attract, retain, and grow businesses and jobs for the regions of Los Angeles County. Since 1996, the LAEDC has helped retain or create more than 152,000 jobs, providing $7.5 billion dollars in annual economic impact and more than $128 million dollars in annual tax revenue to support local government and schools.
Posted by Bruce R Bartlett at 9:27 AM