For Hollywood Producers, Is the Glamour Gone? 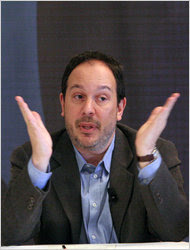 A great article from the NY Times regarding a job that is getting tougher and tougher. I've noted this previously here.


"Mr. Simpson said one secret to surviving the current business climate was to adopt new ways of financing and distributing pictures — including tweaking the order in which various tiers of investors get paid and embracing streaming and video-on-demand services.

“Some of the most experienced studio producers don’t understand” the new environment, he said by e-mail: “They often have the greatest difficulty adjusting.”

... very true, it reminds me of a recent conversation with a client who is just about to graduate from graduate film school. He was discussing a project with his prof. who asked if he could change the setting from Honk Kong to Philadelphia. He felt it didn't work in HK. Well the reason it was set in HK was it was actually a project he was developing with a hot TV producer who could get financing in HK. Adaptation

FOR decades, movie producers had one of the cushiest gigs in Hollywood. Studios kept stables of them around — all expenses paid — to shepherd movies through their various stages: inception, the nitty gritty of filming, post-production and publicity.

The job was appealing for its variety as studios sought films ranging from teenage blockbusters to arty dramas to dark comedies. Producers also commanded respect because, as powerful middle men, they could help directors stand up to screwball requests from studios, or vice versa.

Today, though, movie producing is in crisis.

Studios, reeling from declines in DVD sales, have sharply reduced the number of producers they keep on retainer. Warner Brothers, for one, has slashed producer deals by 20 percent since 2008, and more reductions are on the way as current deals expire. This has left a generation of producers having to find a new way to pay their development bills.

At the same time, the number of movies being made has shrunk drastically. Half the independent distributors have folded over the last couple of years, and the big studios are cutting back. Paramount Pictures will release 15 films this year, a 32 percent reduction from 2007.

And that leaves fewer jobs for producers.

Many of the jobs that do exist — bloated sequels, bloated remakes — are depressing to this brainy bunch, resulting in a lot of midcareer angst. Yes, everyone wants to make money. But ask five producers why they got into the business and four will pontificate about a desire to create cinematic art. Few would say they came to Hollywood to make a really great “Spy Kids 4.”

On June 4, the Producers Guild of America will host its second “Produced By” conference in Los Angeles. By gathering elite members of the profession together — and inviting the fledgling ranks to mingle with them — the guild hopes to leave all its members smarter and stronger. Among the big names participating are James L. Brooks, Richard D. Zanuck and Brian Grazer.

About 1,200 attendees are expected at the three-day event, with seminars including “Brand New World: Execution of the Deal,” “Where’s the Money?” and “Better, Faster, Cheaper.”

At the very least, said Mark Gordon, whose producing credits include “Saving Private Ryan,” the conference should help give producers an attitude adjustment. “It’s how does one turn lemons into lemonade,” Mr. Gordon said.

Take the renewed focus on sequels and remakes. “It’s frankly a little depressing for everyone because most producers have a passion for storytelling and don’t want to rehash the same thing over and over,” he said.

But Mr. Gordon added: “That’s the reality of the business right now. You can either say ‘This is not interesting for me’ and go play somewhere else. Or you can figure out a way to deliver what studios want while developing passion projects independently.”

Hawk Koch, whose producing credits include the 2000 thriller “Frequency,” noted that there were still producer success stories, like the fellows behind “Paranormal Activity,” the inexpensive horror flick that sold about $193 million at the global box office and has a sequel on the way.

Other success stories include Basil Iwanyk (he hit it big with the recent remake of “Clash of the Titans,” which has made over $463 million at the global box office, and is prepping a sequel) and Judy Cairo and Michael A. Simpson, the producer team largely responsible for the awards-season darling “Crazy Heart.”

Mr. Simpson said one secret to surviving the current business climate was to adopt new ways of financing and distributing pictures — including tweaking the order in which various tiers of investors get paid and embracing streaming and video-on-demand services.

“Some of the most experienced studio producers don’t understand” the new environment, he said by e-mail: “They often have the greatest difficulty adjusting.”

CAN the Producers Guild help? If increased participation in this organization is any indication, a lot of people hope so: membership in the group, which is 60 years old, stands at over 4,200, a 40 percent increase over five years ago. There are an estimated 10,000 working producers in Hollywood.

Mr. Koch and Mr. Gordon want to become co-presidents of the organization; they are running unopposed, with results to be announced June 4. Among their goals are helping members obtain better health care coverage and ensuring that production companies hire guild members.

Most important, they want to persuade studios (and television networks) to formally adopt a system for assigning the producer credits that scroll by at the end of a movie.

There are various levels of producer credit in movies. “Associate producer” is really just a prominent thank you; “executive producer” generally means someone who brought in financing but didn’t play a large creative role.

The heavy lifting is done, counterintuitively, by those labeled simply as “producer,” and Mr. Koch and Mr. Gordon want to make sure this credit has gone to people who actually did the work — which is not always the case now.

Regardless of their success on that front, expect to see more producer names in the end credits as people are forced to team up in greater numbers.

Producers are a problem-solving bunch. It’s their job. They figure out how to fit a budget to a script, how to persuade stars to bite on a project and how to delicately fire a director. So they will undoubtedly figure out how to survive, even if it means following the advice of Bob Gazzale, the chief executive of the American Film Institute.

At a recent event honoring the producer Jerry Bruckheimer in Los Angeles, Mr. Gazzale noted: “What do producers do? Whatever it takes.”
Posted by Bruce R Bartlett at 2:55 PM 1 comment: