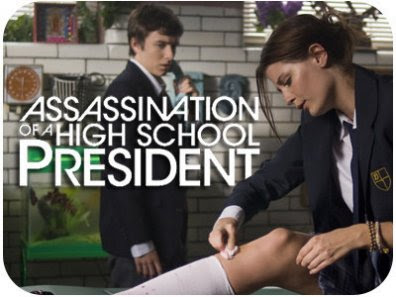 If you’ve been reading our site for a while, then you may remember our coverage of the Sundance film Festival in 2008 and my glowing endorsement of Brett Simon’s excellent high school noir film Asssassination of a High School President. If not, read my review here then come back for the rest of the discussion. Don’t worry, I will wait. For further explanation, check out my list of the 10 Best Films of Sundance 2008 — Assassination is right at the top as the #1 film.

Moving on, I was contacted by my good friend Peter over at Slashfilm today with some heartbreaking news about the film, which was loved by just about everyone who saw it last year at Sundance and here in Austin last year during South by Southwest (SXSW). The film, which stars Reese Thompson (Rocket Science) and Mischa Barton (The O.C.), tells the story of an intrepid high school reporter (Thompson) who begins to investigate the story behind some stolen SAT scores and ends up getting caught in a vicious spider web of deceit. It’s an incredibly well-written script and an amazingly well executed film — essentially it is the noir version of a John Hughes movie.

The heartbreaking news delivered by Mr. Sciretta was that this film may become a victim of the current economic crisis. According to an inside source, the film is currently sitting on the proverbial shelf in Hollywood after the involuntary bankruptcy of the Yari Film Group earlier this year. This put the film’s previously scheduled April release on hold, and since then there have been various studios looking at the film for possible distribution deals, but right now it poses a major financial risk for any studio who might pick it up. Sony currently owns the home video distribution rights and could very well put it out direct-to-DVD, but that would be a sad situation. It would be really great if a studio such as Sony Pictures Classics, Fox Searchlight or Summit Entertainment would snatch up the film from the bargain bin and give it a limited release. It would certainly get some support from the online community. Need proof, check out the thoughts of Peter over at /Film or Quint over at Ain’t It Cool News.

So what can we do about this? Well, at this point we are doing what we can — writing about it and helping generate some awareness. Our hope, as a community, is to raise some buzz and awareness among the indie labels and show them that this would be a worthwhile cause. What can you do? Check out the film on Facebook and go over to the film’s Official Site and register for updates. Who knows, if we can get enough people on board and in support of this film, maybe it will get a theatrical release. Either way, it should be on your must see list, straight to DVD release or not.
Posted by Bruce R Bartlett at 11:35 AM